So, it’s RELEASE DAY for ‘Women: Withstanding All’ the anthology developed for Women’s History Month that features 14 women writers of disparate genres, including me. Get your copy, and then please leave a review. But if you need persuading, read the excerpt below from my writer-friend Lily Java!

I was sitting on the grass in Central Park, watching your daddy and your Uncle Marcus play the stupidest game of Frisbee I’ve ever seen. It involved one-handed play since the other hand had a Bud in it. They were both pretty drunk off the six pack they’d brought into the park and hidden under the carriage of your stroller, even though neither of them had drunk more than two beers a piece. Yeah they’re lightweights, and we’re lucky the cops didn’t spot them; but they were having fun so I didn’t mind. Your daddy works so hard; I like to see him let loose when he can. 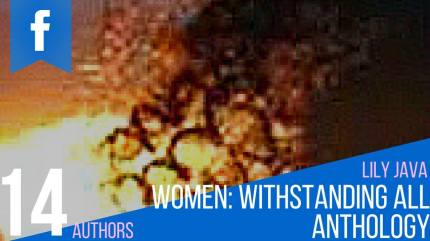 You were there, lying on the blanket Grandma crocheted for you. I worried that the yarn she’d used was too scratchy, but you never seem to mind and always fall asleep on it like it’s the most comfortable thing in the world. Not this time though. This time you were wide awake. Your beautiful, expressive brown eyes were opened to their fullest and staring at me with such intensity, it startled me. It was like you could see right through the back of my head. It surprised me so, I said, “Oh!” Both my hands came up to my mouth to hold back all the other errant exclamations that wanted to come out of me.

Either your dad or your uncle must have seen the gesture because the next thing I know, they both came running. Your father knelt in front of me and said, “Honey, what’s wrong? And I blurted out the one thing that probably would succeed in doing nothing to ease his mind. Yes, your altogether ludicrous mother said, “We can’t die!” And then, your dad’s eyebrows shifted to a different height on his head very near his hairline. I’m going to digress here and say that’s the same exact look he gave me when I told him I was pregnant, but that’s a totally different story.

I could feel them, your dad and his brother exchanging looks, but I kept staring at you. See, it was in that moment approximately ten weeks after you were born that it hit me like a sledgehammer on the foot. You were so utterly beautiful lying there; truly the most beautiful thing I’d ever seen. It was the look on your face, I think; so innocent, such trust, such helplessness, and so much love all mixed together and confined in the face of an angel; and it was up to me and your father to protect you, cherish you, and love you. That meant we had to take care of ourselves until you weren’t helpless anymore. No, it wasn’t a sledgehammer, it was something larger—an anvil around my neck.

Your dad reached over to you then. “Lucky,” he said, easily getting your undivided attention in a way he often did with me too. “You really need to stop scaring Mommy.” And the spell you had me under was broken. Whatever you had communicated to me in that moment wasn’t gone, it was just released into the atmosphere and leaving me with only two thoughts: One, I need to join a gym, and two, I need to start writing you letters.